Plastic Surgeon Prepares Himself and Others for Aug. 21 Total Eclipse

Note: This article originally appeared in the June 2017 issue of Plastic Surgery News. 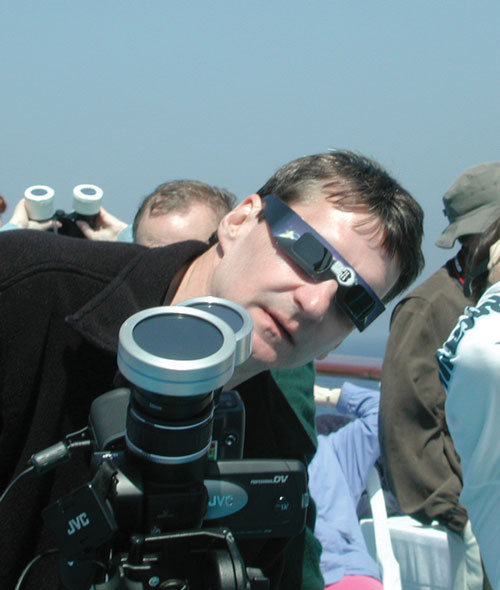 ASPS member Gordon Telepun, MD, won't be in the office or the O.R. on Aug. 21, and he's encouraging as many plastic surgeons as possible to take the day off, too.

The Decatur, Ala.-based plastic surgeon is encouraging doctors to take their families to some location within a 2,500-mile-long path that cuts from Oregon to South Carolina across the continental United States, where you will see a total solar eclipse.

Even if you're not particularly interested in astronomy, Dr. Telepun says a good look skyward on Aug. 21 could change that.

"You have to see it to appreciate how wonderful the event is," he says. "It's something that should be on your bucket list. It will make an impact on you when you see it for yourself and the opportunity to see this one crossing the entire United States should not be missed, because the next one will be in 2019 and it will hit the coast of Chile."

His first eclipse at age 6

Suffice to say, Dr. Telepun knows more than his fair share of information about eclipses. When he was age 6, his family took a trip to New Jersey during a time when a total eclipse occurred in Canada. As New Jersey was out of the path of the total eclipse, Dr. Telepun saw the partial eclipse from the beach.

His father brought welders' glasses on the trip so that he and his son could safely look at the partial eclipse. From that moment, a lifelong fascination with astronomy developed, and he began collecting telescopes, watching rocket launches and following space-exploration missions on TV.

Despite the interest in astronomy, Dr. Telepun pursued a career in plastic surgery – he trained in general surgery at University of Maryland in Baltimore, followed by plastic surgery training at Medical College of Virginia in Richmond and a fellowship with renowned plastic surgeons Patrick Maxwell, MD, and Jack Fisher, MD, in Nashville.

All the while, astronomy remained a hobby that filled time away from the office. In 2001, Dr. Telepun began "chasing" eclipses, which, in the course of the past 16 years, took him to locations as varied as the Mediterranean Sea, Zambia and Zimbabwe.

Travel must be carefully coordinated, as Dr. Telepun runs a private practice in Decatur, which he first visited in 1993.

"When I was doing my fellowship in Nashville, there was a lady who came up from Decatur to have a double mastectomy and breast reconstruction done by Dr. Maxwell," he recalls. "She told me about their small town and that they didn't have a plastic surgeon there. Anybody who needed immediate breast reconstruction had to go to Birmingham or Nashville. I called up the hospital in Decatur and said I wanted to visit."

That visit led to him setting up his practice. Unlike working in a big city or at a large hospital, however, he doesn't have back-up or other surgeons available to step in if he wants to make an international trip to catch an eclipse.

"I have to stop operating for basically a week-and-a-half," he explains. "I don't have coverage. I'm it. I'm on the cellphone taking care of my patients if I'm in cellphone coverage – I'm never away from it, but I've managed to balance it."

Still, not all aspects of astronomy require significant travel. Dr. Telepun has an observatory dome in his backyard, and although Decatur might be more remote than some big city practices, it puts him advantageously close to NASA's Marshall Space Flight Center in Huntsville, Ala.

Given his experience traveling the world to witness, video and photograph eclipses, NASA has made Dr. Telepun a Subject Matter Expert for the 2017 eclipse. So far he's given presentations to the Birmingham Astronomical Society and coached the team at the Smithsonian Air and Space Museum in Washington, D.C., that will be go to Missouri to stream the Aug. 21 eclipse.

For those interested in making a solar eclipse trip, Dr. Telepun says weather predications, cost and time of travel, totality duration and the safety of the country in which a total eclipse takes place all factor into consideration. As 71 percent of the Earth is covered in water, many total eclipses take place on paths that cut through an ocean.

This reiterates why the Aug. 21 event is so noteworthy – not only will it be easy to travel to for most Americans, the instances in which a total solar eclipse's path cuts across the continental United States are rare. Even if you're not within the path of the total eclipse, all Americans will be able to experience a partial eclipse at some point during the day. Still, Dr. Telepun says the experience of getting to see a total eclipse should be incentive for anyone to make a day trip to one of the 12 states in the path.

For novices, Dr. Telepun also has developed a wealth of information online to prepare for the event, including a YouTube channel named Foxwood Astronomy, and a mobile app available at solareclipsetimer.com.

In 2001, Dr. Telepun began writing a dedicated eclipse timer to note the four contact times and max eclipse. Thanks to spoken warnings and countdowns so that users can enjoy the event or ready their camera instead of constantly looking at their watch. That timer ultimately developed into a smartphone app for both iPhone and Android users that uses the GPS function in the phone to determine location, to calculate the exact contact times for the user's position, convert the time to the user's local time zone and then walk the user through the entire eclipse – including when to look at the horizon and when to put on and remove glasses.

Dr. Telepun's app is the only one available that calculates the clock times necessary to take a perfect sequence of partial phase eclipse images before and after totality.

On eclipse day, the sun will be about 94 million miles away and the moon will be about 277,000 miles away. As they are perfectly in line with the Earth, the dark shadow of the moon (known as the umbra) will be about 70 miles wide. When you are in the path, first contact occurs when the moon touches the edge of the sun. As more of the sun is covered, the temperature drops.

About 10 minutes before totality, you can sense it getting darker. Animals think it's nightfall, so crickets start to chirp and birds roost. Second contact occurs when the moon completely covers the sun and you see totality, which looks like a black eyeball in the sky. This is the only time it's safe to look at the event with your naked eye.

If this you're interested, don't wait to make reservations. Dr. Telepun notes that hotel rooms in the path of the eclipse are almost all booked and are raising prices. He says traffic in the path will be busy and – depending on the weather – you might want to consider a range of locations within the path.

Should you make the trip, Dr. Telepun says you might get the same itch he had all those years ago on a New Jersey beach.