Medications are administered for your comfort during the surgical procedure. The choices include intravenous sedation or general anesthesia. Your doctor will recommend the best choice for you.

Surgery of the nose is performed either using a closed procedure, where incisions are hidden inside the nose, or an open procedure, where an incision is made across the columella, the narrow strip of tissue that separates the nostrils. Through these incisions, the skin that covers the nasal bones and cartilages is gently raised, allowing access to reshape the structure of the nose.

If the septum is deviated, it can be straightened and the projections inside the nose reduced to improve breathing.

Once the underlying structure of the nose is sculpted to the desired shape, nasal skin and tissue is redraped and incisions are closed. Additional incisions may be placed in the natural creases of the nostrils to alter their size.

For a few days splints and gauze packing will likely support the nose as it begins to heal. While initial swelling subsides within a few weeks, it may take up to a year for your new nasal contour to fully refine. During this time you may notice gradual changes in the appearance of your nose as it refines to a more permanent outcome. Swelling may come and go and worsen in the morning during the first year following your nose surgery.

Open rhinoplasty incision across the columella 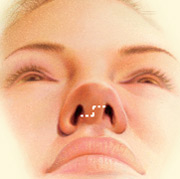 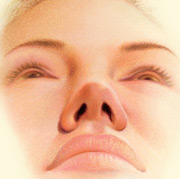 A nose surgery procedure to improve an obstructed airway requires careful evaluation of the nasal structure as it relates to airflow and breathing. Correction of a deviated septum, one of the most common causes of breathing impairment, is achieved by adjusting the nasal structure to produce better alignment.