Let your plastic surgeon know if you're taking psychoactive drugs 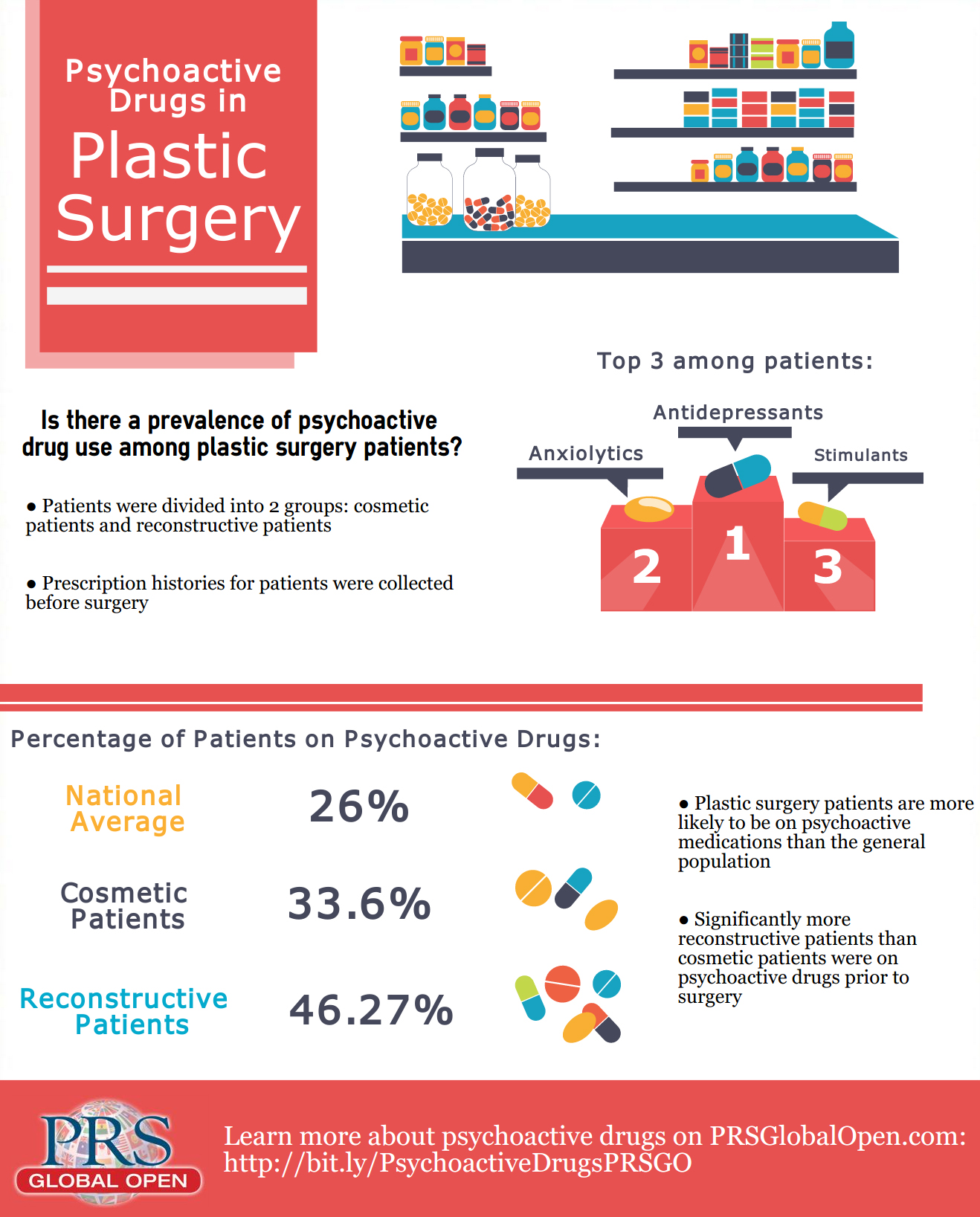 The use of psychoactive drugs is exploding among plastic surgery patients, but not all patients disclose their usage to their plastic surgeons. Why does that matter? Although people may not realize it, these medications can lead to surgical complications.

To investigate the prevalence of psychoactive drug usage in plastic surgery patients, Dr. Steven P. Davison and co-authors studied 830 patients in an urban private practice. The results, which were just published in PRS Global Open, showed that nearly one-half of breast reconstructive patients and one-third of cosmetic surgery patients take at least one type of psychoactive medication, rates that compare with one-quarter of the general population.

What are psychoactive drugs?

Psychoactive drugs are medications that alter one's perception, mood and/or thoughts. There are five main classes of these agents:

The most used psychoactive drugs

Cosmetic surgery patients are significantly more likely than the general population to take stimulants, a class of medications often used to treat attention-deficit hyperactivity disorder (ADHD). Weight loss, which is one of the side effects, is felt by some stimulant takers to actually be one of the benefits. Despite the skyrocketing use of these medications in recent years, there are risks: When taken long term, they can increase the risk of a heart attack, depression and fatigue.

Nearly one breast reconstruction patient in every three is medicated for anxiety, three times the rate in the general population. Because fasting can induce withdrawal, these patients are put at risk when they are asked not to eat or drink anything for a number of hours before surgery.

Breast reconstruction patients are also frequent users of antidepressants, with one in four taking this type of medication. Usage can put these patients at increased risk of developing a hematoma, a collection of blood beneath the skin after surgery. Other risks include episodes of high blood pressure and an irregular heartbeat (arrhythmia).

A lack of understanding of the medications' risks may contribute to some patients' failure to disclose their psychoactive drug usage. Patients play a vital role in their own healthcare. By documenting all the medications they use, they can help minimize their own surgical risks.

Why health history updates are so important

Another reason the medical record may not reflect current psychoactive medication usage is that the health history may be outdated. Breast reconstruction patients may be at particular risk, as they are more likely to change medications while undergoing multiple operations. In order to minimize complications associated with psychoactive medications, the researchers urge plastic surgeons to keep their patients' health information appropriately updated. Patients themselves can make sure their medical record is current by volunteering any changes.

Plastic surgery and the whole patient

Plastic surgical training focuses on procedures. However, as more patients use psychoactive medications, the researchers suggest a greater emphasis on training in medical and psychological issues. A thorough patient history combined with a greater familiarity with psychoactive drugs can result in improved safety of a plastic surgeon's patients. After all, patients and plastic surgeons have something important in common: They both want to minimize surgical risks.

This blog was contributed to ASPS by Dr. Heather Furnas.