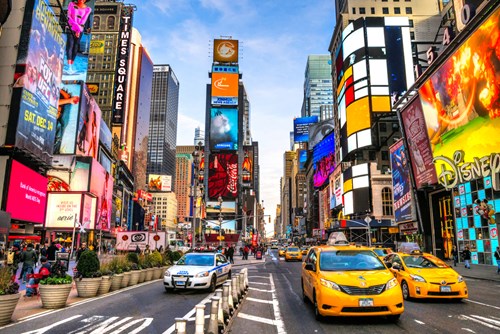 In a city like New York, 24 hours never feels like enough for exploring the city's incredible sights, neighborhoods, restaurants and cultural centers. As the most populous city in the United States and one of the most ethnically diverse, it's easy to feel overwhelmed by options.

Want a slice of pizza at midnight in the West Village? You'll have to choose between 10. Set on exploring the outdoors for cityscape views? You'll have to get more specific. Craving some live comedy with friends? You can take your pick.

While the options can feel overwhelming, you'll never go wrong sticking to some of New York's classics – the tried-and-true favorites of both tourists and natives alike.

You may want to get up early – it's the city that never sleeps, after all. Morning is the best time to explore Central Park. Grab a coffee at Zabar's and make your way to The Mall. You'll see New Yorkers walking their beloved dogs, and athletes of almost every variety exhibiting their skills. This park is truly the centerpiece of NYC, spanning neighborhoods and creating a green haven within the bustling city. It's a place for exercise, art, socializing and simply being outdoors. Take a jog on the Bridle Path or get lost wandering in the Bramble. The Conservatory Garden is not to be missed.

While you're in the neighborhood, you can get your art fix at the Metropolitan Museum of Art. Choose one wing or one exhibit – as the largest art museum in the United States, you'd need days to cover the entire museum. Many rave about the Egyptian Temple of Dendur, the ancient Greek and Roman statuary and the medieval armor from around the world. If it's warm, grab a drink on the rooftop and take in the beautiful sights of Central Park from above.

Lunch in New York is a great way to try some of the casual favorites. Ask around for suggestions, but be prepared for endless debates among natives as to the best food in the city. Some of the best are the ultra-casual classics that many can agree on – including a burger at J.G. Melon or a pastrami sandwich at Katz's Deli. If you crave Chinese, head over to Joe's Shanghai for some of the best soup dumplings in the city. While the best ramen spot is certainly up for debate, Ivan Ramen on the Lower East Side is a beloved favorite and recently featured on the Netflix series, "Chef's Table."

After lunch, consider making the trip to Brooklyn for an afternoon of craft breweries and trendy shops. Hop on the subway – it's the best and fastest way to get around the city. Once in Brooklyn, head to Other Half Brewery or Grimm Artisanal Ales, two of the best craft breweries in the area.

For dinner, if you are looking for Italian food, we highly recommend heading to Via Carota in the West Village or Misi in Brooklyn. Both make amazing homemade pasta that will make you want to return for more the next night.

This wouldn't be a proper NYC guide if we didn't talk about pizza. One of our favorite places to grab a slice would be from Rubirosa in SOHO. Their vodka sauce and tie-dye pizzas are must-haves. Looking for something more high end? Try Manhatta on the 60th floor in the Financial District; it holds arguably some of the best dinner views in the city – Hudson River, midtown Manhattan and the Statue of Liberty.

After dinner, check out the High Line on the lower west side of Manhattan. The High Line is a 1.45-mile-long elevated park created on a former New York railroad bridge. The views of the city are fantastic and there are street vendors selling ice cream, coffee and other street food. At the south end of the High Line is the Whitney Museum of American Art. If you have enough time, take a look through the Whitney – they have a mixture of 20th- and 21st-century American art. The museum just recently opened and the architecture is beautiful.

After dinner, there are a host of options depending on what you are in the mood for. You could head to the world-famous Madison Square Garden to see the New York Knicks or the Rangers play or perhaps catch a concert.

If something smaller and casual is more your style, check out the Comedy Cellar in Greenwich Village, where some of the most famous stand-up comedians go to practice their new material. Make sure to check online to reserve a ticket about a week before or you can stand by to grab an open spot. Another local highlight are the Broadway musicals. The Theater District, near Times Square, is home to 41 of the best theaters in America.

Lastly, if it's a nice summer night, there's no better way to spend it than at a Yankees or Mets baseball game in true American fashion – with a hotdog and beer.

It ain't over 'til it's over

The day isn't over quite yet, so make your way over to The Aviary NYC in the Upper West Side. Located on the 35th floor of the Mandarin Oriental, The Aviary specializes in making innovative cocktails, and you will feel more like you are in a chemistry class than a bar. The prices are steep, but the experience is worth it. Feeling something more low-key? Head to the Broken Shaker located in Kips Bay. The Broken Shaker has a great roof deck and a long list of craft beers on draught.

You'll probably find it best to get some rest after a long day, but believe or not, we've only just scraped the surface of what New York has to offer. Anyway, thanks for coming – and be sure to come back soon!