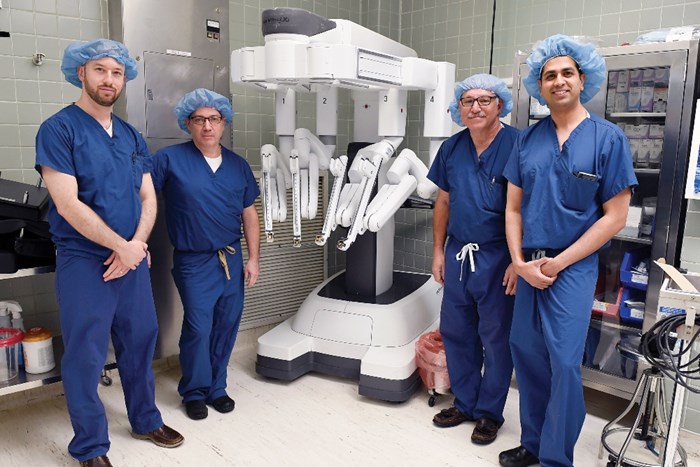 Dr. Tanna, associate professor of Surgery at Long Island Jewish Medical Center and associate program director of Plastic Surgery at Northwell Health, led the team that performed the procedure on the 45-year-old patient – who hadn't yet been diagnosed with breast cancer.

However, she carried the BRCA gene and sought preventive mastectomy, specifically with robotic surgery. Six months earlier, she had undergone robotic-assisted, bilateral salpingo-oophorectomy – and was so pleased with the outcome that she sought robotics for her double-mastectomy.

Trouche's desire for the robotic procedure was based mainly on her desire for smaller incisions and to minimize scarring. Use of the robot can allow for these minimally invasive options, Dr. Tanna notes.

Sitting at a console and maneuvering hand-controlled joysticks that translated the motion to the da Vinci robotic arms, Dr. Tanna – who was joined in the procedure by Northwell surgeons Alan Kadison, MD, and Gary Deutsch, MD, in addition to Dr. Kasabian – completed the mastectomy and reconstruction solely through a 3-4 cm incision, located away from the breast, along the mid-axillary line. The scar only becomes visible when the patient raises her arm, he says.

Dr. Tanna and the team had traveled to Milan and Paris to observe robotic mastectomy performed, respectively, by Antonio Toesca, MD, and Benjamin Sarfati, MD. "They've had a lot of success," Dr. Tanna says. "When I saw how they did this surgery, I was impressed."

Upon returning, he dove headlong into preparations aimed at bringing the robotic procedure to the United States. "We did robotic simulations and cadaver laboratory training with the robot," Dr. Tanna says. "I'd been prepping to perform this. What's coincidental about this case is that a patient navigator at the medical center had learned about our work with the da Vinci robot, and she also learned that Elodie was looking for this exact procedure. Elodie found us, and we found her.

"Her reconstruction was performed through a small incision, which can be located at or posterior to the mid-axillary line," Dr. Tanna says. "The robot has three arms to work with – we had the ability to use two surgical instruments, and the third had the camera, which allowed for high visual-optics and magnification.

"The mastectomy specimen was performed – and the mastectomy came as one specimen, or en bloc," he adds. "We used a 'GelPort,' which is like a funnel. The port lets the instruments easily come in and out, and we figured out a way to pull the breast specimen out as one piece.

"Next, we performed a direct-to-implant prepectoral reconstruction on Elodie," says Dr. Tanna. "The nice thing is, we believe that by not placing incisions directly on the breast, there will be better preservation of vascularity to the nipple, areola and skin envelope."

Not for all – yet

Unfortunately, not all mastectomy patients will be appropriate for the procedure, he says. "It's ideal in smaller-breasted women, or women with mild to moderate ptosis. In women who need mastectomy skin-flap reduction, robotics really doesn't make sense," he says. "The only way to perform a skin reduction is to cut away extra skin, and that requires placing an incision directly on the breast. Therefore, that's a limitation."

Regardless of what limitations may currently surround robotic surgery within plastic surgery, Dr. Tanna is confident that its future holds additional and increasingly relevant surprises.