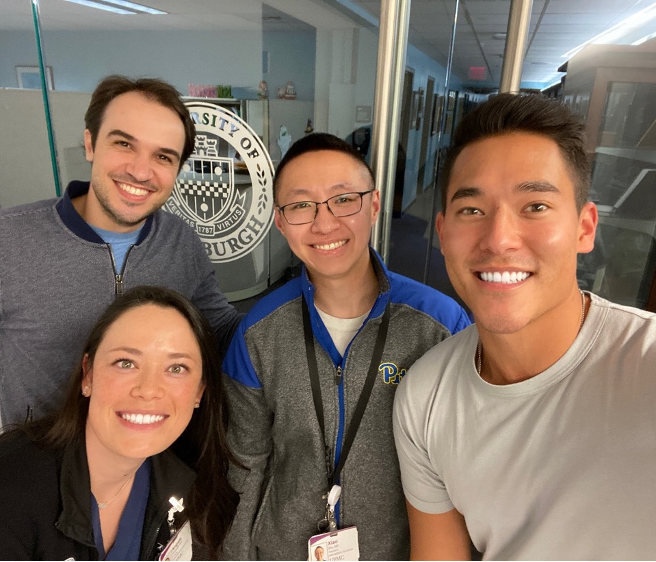 This year's virtual Plastic Surgery The Meeting achieved phenomenal results in providing a new platform for education and interaction for our specialty – and the 2020 Residents Bowl perfectly encapsulates that achievement. The moderators, Edward Davidson, MD, and Raj Sawh-Martinez, MD, added flair to the event as they donned black-tie formal wear to celebrate the final championship round.

The University of Pittsburgh added its name to the list of champions – the first time in the Residents Bowl 10-year history that Pitt ascended to the winner's circle. In prior years, Team Pitt competed honorably but was unable to claim the No. 1 position. This year, Team Pitt welcomed back two seasoned competitors, well-versed with the rules and pressure of the game: Francesco Egro, MBChB, MSc, MRCS, and Walter Joseph, MD, both of whom are integrated chief residents. The Pitt team was rounded-out by PGY-3 Xiao Zhu, MD, and Chief Resident Angela Prescott, MD. The goal was to diversify the team and maintain residents with historically solid In-Service Exam performances.

Rules changed this year: Each team still consisted of four members; however, the team score would be an average of each member's individual score. Submitting the correct answer with the fastest speed would produce the highest score. Every player's score counted.

To prepare, Team Pitt members studied recent In-Service questions, as well as considered the potential for online-connectivity interruptions and the technical difficulties that could arise in a totally virtual format. Therefore, the venue with the fastest connectivity and largest bandwidth was chosen. Pitt's final strategy was to know the answer before the multiple-choice options were presented, which allowed team members to "buzz-in" as quickly as possible.

In the Quarter Final round against Mt. Sinai, technical difficulties arose. Five additional questions were added to the round, in which Pitt went on to triumph. In the Semi-Final round, Pitt went head-to-head against the Johns Hopkins team. This team was not only accurate, but incredibly fast. Hopkins held a clear lead until the final question – when a Hopkins team member answered incorrectly, bringing down the team average. With each advancing round, the tachycardia became more palpable. The support of the faculty and alumni was unparalleled; Pitt had a virtual cheering section during each round.

The excitement and pressure built with each game. In the championship round, the University of Michigan took an early lead. Pitt regained control by answering a challenging question regarding indications for traumatic orbital floor repair. For the remainder of the championship game, Pitt answered with accuracy and intent – and captured the win.

Winning the 2020 Residents Bowl was half unbelievable and half incredible, as Team Pitt knew the competition would be unrelenting and fierce. What made the victory sweeter was being able to share the win with the fabulous residents, faculty and alumni who logged-in to watch. All we can say is, "Hail to Pitt."