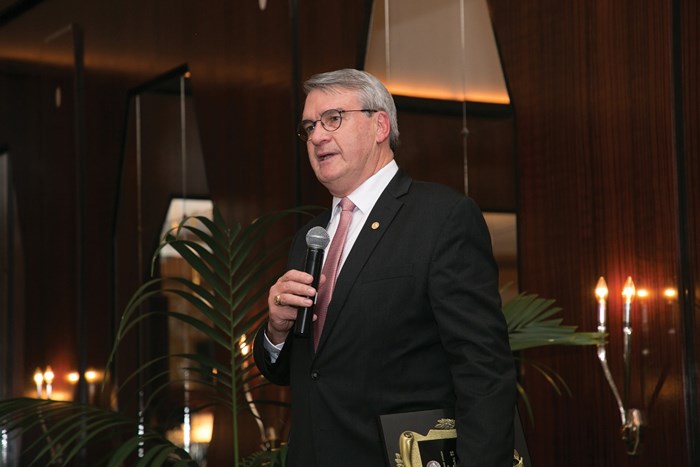 Donald Mackay, MD, DDS, remembers that when he and his wife, Susan, arrived in Hershey, Pa., from South Africa in 1988, his first thought was to apologize.

"Initially, it was kind of a shock," Dr. Mackay recalls with a laugh. "The area has developed a lot over the years, but at that point, the Penn State Health Milton S. Hershey Medical Center was stuck in the middle of a big cornfield. I said to my wife, 'I'm really sorry' – we'd been used to living in big cities like London and Johannesburg. I said, 'Just give it six months and then we can withdraw gracefully.'"

Among these prestigious positions and accolades, Dr. Mackay added the ASPS 2018 Honorary Citation Award to his CV at Plastic Surgery The Meeting 2018 in Chicago.

"From my position as a young surgeon coming over from South Africa, these are the things you dream about but would never expect to come true," he says. "I don't think it happens anywhere else in the world."

But for an incidental chat with Ernest Manders, MD, next to a campfire in 1987, however, Dr. Mackay might have found himself in another part of the world entirely. He had completed his plastic surgery training in Johannesburg and was preparing to move to Paris to pursue a career in craniofacial surgery.

Dr. Manders recalls first meeting Dr. Mackay in 1986, when he and his wife opted not to believe the news of civil war in South Africa and went ahead with a planned trip to the country. Impressed with Dr. Mackay's potential, he invited the young doctor back to Hershey to pursue a research fellowship. When that ended, Dr. Mackay returned to South Africa to head the plastic surgery service at the University of Witwatersrand in Johannesburg, but the national government shortly thereafter cut funding for support of academic medicine. As Dr. Mackay looked toward a new beginning in Paris, Dr. Manders returned to South Africa and encouraged him to return to the United States.

"I assured him that he was a diamond and always would be," Dr. Manders remembers. "I said, 'What you have to decide is whether you wish to be a diamond in a stream bed or set in a necklace, like the Hope Diamond.'"

Dr. Mackay admits he was worried that Hershey couldn't be found on any of the maps that he and his wife scanned, but he accepted the offer anyway. He had to redo residency upon return to the United States, which impressed another one of his mentors, ASPS past President R. Barrett Noone, MD.

"He recognized that if he wanted to be certified, he needed to repeat his residency, which was an onerous thing to do," Dr. Noone says. "The fact that he still did it speaks to his character, which would define his leadership in the specialty and as an educator. South Africa's loss was really America's gain for plastic surgery."

Dr. Manders says he was able to help get Dr. Mackay an additional residency position at Hershey where his supervised clinical work was accepted in the residency experience, so he could sit for the American board exams.

Dr. Mackay notes that things have changed in the intervening years and ABPS now has a pathway that allows well-trained immigrant surgeons, working in academic centers, to become board certified.

Dr. Mackay notes that given his background in dentistry and general surgery in South Africa, he had no trouble stepping into the U.S. plastic surgery community and felt he could contribute immediately. Focusing on pediatric and craniofacial work, Dr. Mackay ultimately founded the craniofacial unit at Hershey Medical Center and also became part of the Lancaster Cleft Palate Clinic.

"It was the first multidisciplinary clinic in the world, and the standard that Lancaster set is what everybody around the world to this day follows in terms of team management," Dr. Mackay says. "It's an incredible organization and allows myself and the faculty here to be connected with some amazing people – past presidents of various organizations and societies. It has an incredible legacy."

Beyond his craniofacial contributions, Dr. Mackay also took part in several significant limb replantation procedures – including a 1-year-old child who had a foot amputated and a 13-year-old boy who lost his arm in a farming accident.

"The 1-year-old grew up to become a cheerleader and soccer player, and a beautiful woman who has visited us years afterward," he says. "The boy whose arm we replanted came to see me a couple years ago. He's now a successful businessman, married and with four kids of his own.

"There are a number of those kinds of cases, and it makes you reflect on being part of such an incredible specialty," Dr. Mackay adds. "When you're able to make a big difference in a child's life, it's an amazing reward."

It's also something he thanks his colleagues, residents and stateside mentors for helping him achieve. The idea of paying it forward is not lost on Dr. Mackay, who cites the honor he felt in leading the RRC and defining how future plastic surgeons would be trained, as well as ACAPS, which he notes is always generating new ideas in training.

The specialty extends, too, to his own family – Dr. Mackay notes that his eldest son, Duncan, is a third-year plastic surgery resident at the University of Pennsylvania.

"He's going to blaze his own trail," Dr. Mackay says.

After serving 20 years as the chief of plastic surgery at Penn State's College of Medicine, Dr. Mackay recently took the role of associate chair in the Department of Surgery, in addition to continuing his role as the William P. Graham III Professor of Plastic Surgery and professor of surgery and pediatrics. Although he notes it's more of an oversight role for the department, it's the kind of job for which his years of leading various organizations have prepared him.

"There's no guesswork in trying to figure out why he's held so many important positions throughout plastic surgery – and elected positions, no less," Dr. Janis says. "He's genuine and authentic, and a sincere individual who's a friend to many and example to all. You never get the sense that you're looking up to him from a hierarchical standpoint, but you do look up to him as a person."

"He takes the time to talk to you, look you in the eye and listen to what's going on in your life," Dr. Janis adds. "That's why he's a role model to so many people – because of how he carries himself." As for the future, Dr. Mackay laughs and says he can just about say he's done it all. "Once the AAPS term ends, then I'll go fishing," he says. "I live in a good part of the country for fly fishing." Of course, he might never have come to learn that if he'd only stayed the six months he first proposed to his wife. He knows that, and says Susan is to thank for every day they've been together and everything he's achieved here. "None of this happens without her," Dr. Mackay says.