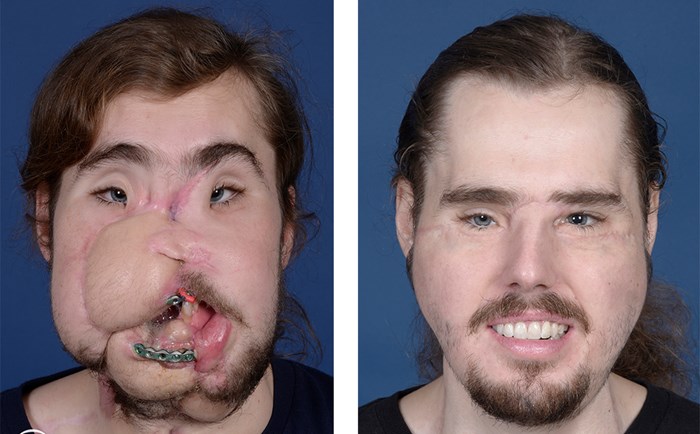 Despite being nearly 2,800 miles apart and with nearly the entire continental United States between them, ASPS members Eduardo Rodriguez, MD, DDS, New York, and Lee L.Q. Pu, MD, MHS, Sacramento, Calif., worked toward the same goal in completing one of the most advanced facial transplantation procedures ever performed, on Cameron Underwood of northern California.

Dr. Rodriguez led the transplant team at NYU Langone Health that in January 2018 involved more than 100 medical personnel technologists, surgeons, nurses and other staff. He says advances in O.R.-based CT scanning saved both time and surgical manipulation, while revolutionary pre-op tissue matching will minimize many of Underwood's concerns and complications.

"Prior to the advent of this technology, we would close the tissues, move the patient into a recovery room and then to the radiology floor for the CT scan," Dr. Rodriguez says. "This would happen the day after the surgery or the following day. At that point, we would confirm that the skeleton is where we planned it to be, and if things weren't right, we would return to the O.R. to modify things. But for Cameron's surgery, the O.R. table became the CT scan table – and as soon as we put the face on, the CT scan took place in the O.R.

"We were able to look at it right there, in real time, to confirm that the actual position of the face transplant replicated the planned position from the computerized surgical plan," he adds. "We had immediate confirmation in the O.R. that everything was exactly where we had planned it to be. This wasn't possible before."

Besides soft tissue, the transplant involved skin, muscle, nerves, bone, teeth and the palate as Dr. Rodriguez replaced a significant amount of the upper, lower and mid-face – including the jaw structure – for 26-year-old Underwood, a gunshot-wound victim. The procedure lasted about 25 hours – nearly 11 hours less than a similar face transplant in 2012 led by Dr. Rodriguez, his first of three.

The case was featured on a "20/20" TV segment that focused on Underwood and his earlier struggles – his gunshot wound was a suicide attempt – and recovery, with Dr. Pu discussing his role as the reconstructive surgeon faced with treating Underwood in June 2016, immediately after the injury.

Dr. Pu, professor of surgery in the Division of Plastic Surgery, University of California (UC) Davis Medical Center, says his approach as reconstructive surgeon was clear from the beginning: prep the patient for a face transplant.

"There was nothing to work with, as the central portion of his face was completely gone," Dr. Pu says. "I talked to his family to get a sense of their expectations, and then I told them that Cameron's injuries were well beyond those that could be addressed satisfactorily through conventional, contemporary reconstruction. I advised them that I'd begin preparing him for a future face transplant."

However, the family had heard of Dr. Pu's reputation as a highly skilled surgeon and expected that he would put Underwood back together.

"One of my residents had to explain to the family in detail what that meant," Dr. Pu recalls. "But then the family did some homework online and realized what Cameron was up against, they went along with the plan."

Due to the patient's inability to control his saliva, which dripped onto and dehisced the flap, he had exposed reconstructed plates and required additional flap rearrangement for wound closure. Ultimately, eight operations were needed to bring Underwood to the point where he could be discharged home and be placed on the face transplant list. Being forward-looking in his approach, Dr. Pu says he only harvested skin flaps and stayed away from fibular flaps, which would have led to leg instability.

"I didn't compromise any major donor sites – and now he's got a great outcome," he says.

"It allowed me to put his facial bones in the right pre-transplant position, which was an important procedure," he explains. "Even though his facial bones were riddled with gaps, we were able to provide good alignment. If we hadn't, the transplant wouldn't fit that well.

"I'm glad I was able to provide that assistance – because Dr. Rodriguez executed the facial transplantation extremely well," Dr. Pu continues. "The outcome of his procedure was tremendous – in my opinion, the best done to date."

The face transplant was the second undertaken at NYU Langone by Dr. Rodriguez, the Helen L. Kimmel Professor of Reconstructive Plastic Surgery and chair of the Hansjörg Wyss Department of Plastic Surgery. The facial transplantation program at NYU Langone – the only medical center in the state with a dedicated program for facial transplantation, and one of only a few in the nation – was launched by Dr. Rodriguez in 2014.

In addition to the O.R.-based CT scan for Underwood, 3-D technology allowed for the creation and design of patient-specific instruments, plates and screws. Still, Dr. Rodriguez says the greatest advancement in this face transplant compared to past procedures was the result of major strides in matching the face donor to its recipient, and a tailored immunosuppression regimen.

"These are two individuals who have different sets of antibodies and antigens, but today we can study their potential merger so precisely – before we perform the operation – that we can actually define and treat the recipient with very specific, targeted therapies that help limit rejection," Dr. Rodriguez says. "That's far more important than the technological advances."

"The ability to limit rejection in these patients long-term will provide longer-lasting results," he adds. "Every time a patient has a rejection episode, we have to treat them with numerous medications, and often, the dosages of medications we give them can potentially compromise their life in the future. The matching of these patients is now so precise that, so far, for both Cameron and for the previous face transplant patient at NYU Langone, neither has experienced an acute rejection episode."

Not only was Underwood's procedure the most precise, it also broke ground in another important metric that announced the growing acceptance of the procedure: A third of the cost of his care has been covered by commercial insurance.

"We're getting to the point we arrived at with liver transplants," Dr. Rodriguez says. "That's now a mainstream procedure."