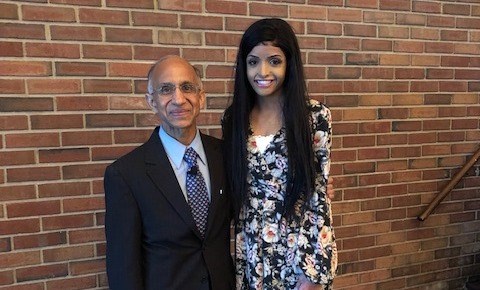 In 2003, 19-month-old Teeba Furat Marlowe was riding with her family in the Diyala Province of Iraq when an insurgent bomb struck their vehicle. The explosion instantly killed her three-year-old brother and severely disfigured Teeba's scalp, ears, face and hands. Unable to receive proper medical care to treat her burn injuries and reduce scarring, Teeba was shunned in her village due to her disfigurement."

Three years after the roadside bombing, Barbara Marlowe of Ohio came across a newspaper article about 4-year-old Teeba and several other severely burned Iraqi children who had no access to reconstructive surgery and burn care. After reading the story, Barbara set out to grant her family's wish to get Teeba a wig. Her quest to help Teeba, however, ended up going much further.

"I couldn't get her eyes out of my head," Barbara recalls. "I taped that photo to the wall, and looked at it every day. Surprisingly, she had these beautiful eyes with long eyelashes that were untouched."

Teeba couldn't get the medical attention she needed, as many surgeons fled the war-torn area due to violence. To that end, Barbarafelt compelled to do more than send Teeba a wig; she wanted to get her medical treatment in the United States.

"I decided to email the correspondent of the article in Baghdad, James Palmer, to ask if I could talk to her family and find the help she needed here," she says, adding that she also reached out to the Palestine Children's Relief Fund for help to secure Teeba's medical visa. "We were at war in Iraq in 2006, so trying to get her here felt impossible. I reached out to Congressmen, the media and airlines to get a flight donated. It was challenging because whenever I took a step forward, there would be two steps backward."

After a year-long process of hurdles, prayers, phone calls and media outreach, Teeba finally arrived in Cleveland with her grandmother, and the Marlowes offered them a home. She received treatment under the care of The PSF immediate-past President Arun Gosain, MD, former division chief of pediatric plastic surgery and director of the Craniofacial Anomalies Clinic and Vascular Anomalies Clinic at Rainbow Babies and Children's Hospital. Dr. Gosain performed Teeba's first tissue expansion in 2007.

"Dr. Gosain is an incredible physician – he's so skilled and meticulous," Barbara says. "She would challenge him and debate him about procedures because she wanted to be in charge, but he was so patient with her. He talked directly to her as opposed to me. He would let her have some leeway, but somehow, he was always able to maneuver the situation so that she could finally take a step forward. She had to walk around with tissue expanders all over for a long time. She was also terrified of anesthesia, but he was very patient with her. All those experiences have now propelled her to be a pediatric anesthesiologist. Her experience set her career path and it's really because of Dr. Gosain."

Dr. Gosain credits his nurse, Randi Neate, and his pediatric plastic surgery team at Rainbow Babies and Children's Hospital in Cleveland for being so considerate of Teeba. Dr. Gosain feels that Teeba was dealing with a variety of factors when they first met that most children who need plastic surgery in the United States simply don't have.

"Not only were there disfiguring injuries – which is difficult enough for young children – but she was in a new country with a new family and she didn't speak the language," he recalls. "We often see children who face one to two of these hardships – but Teeba faced them all, so it was obvious why she was so reserved. Speaking to her was very important. We wanted to make her feel as though our team was focused on her alone, and that we understood the unique hardships that she was going through."

Although her grandmother returned to Iraq within the first year of their arrival, Teeba stayed with the Marlowes. Now 17, she has undergone 19 reconstructive surgeries to resurface her face and hands to date. Dr. Gosain left Cleveland for Chicago in 2012, but remained involved in each of her procedures and continues to work with Teeba for her ongoing reconstructive needs.

Dr. Gosain notes that the injuries Teeba sustained in the bombing involved her face from the neck up, as well as her hands, because her torso and lower body were protected by a heavy jacket and winter clothing. Finding like tissue to repair the damage done to her face, scalp and hands posed a reconstructive challenge.

"We began by expanding tissue from the neck, but the problem was that there wasn't a distinct barrier of where the burns started, and the key donor site – the neck – was partially injured," he says.

Although expanded neck tissue helped repair damage around Teeba's eyes and mouth, Dr. Gosain and his team also had to perform tissue expansion in a way that wouldn't cause significant contracture of the mouth and eyes – hence why there had to be so many procedures.

In addition to the multiple procedures necessary to prevent contracture, Dr. Gosain says consideration had to be given to the natural growth of a child. As Teeba grew in size, some of the transferred tissue would become tight, and further work was necessary to rearrange these tissues so as not to distort Teeba's mouth and eyes.

Nevertheless, he says the transformation that's occurred over the last 12 years goes beyond her appearance.

"I first came to know Teeba as a shy, introverted 5-year old girl, who did not care to express herself," he says. "The transformation goes far beyond her progress with reconstruction; it is a transformation in spirit and attitude that has led her to be a leader in the emotional rehabilitation of children and youth."

In addition to Teeba's work as an ambassador for children with facial deformities, she released a book, "A Brave Face," on March 12 that discusses her journey through reconstructive surgery. The book also includes the perspective of Teeba's Iraqi mother, Dunia Furat, and explores the bond formed between her two mothers over a decade, as well as their determination to provide their daughter with a better life and future by any means necessary.

Teeba credits Dr. Gosain for helping her improve her confidence through the years by reducing scarring and restoring facial function. Teeba is currently a high school sophomore, accomplished dancer, writer and public speaker, and she also serves as Honorary Youth Ambassador for the Iraqi Children's Foundation.

"Dr. Gosain told me he was going to make me more beautiful than I already was through tissue expansion," Teeba recalls. "In the beginning, the scars on my face prevented me from smiling, crying and doing other everyday activities. After the procedures, I could do them freely without pain, and I owe that to Dr. Gosain."

"The stares from others decreased, and I felt I could face my future more confidently with my head held high," she adds. "Dr. Gosain was always patient, and genuinely valued my concerns even at a young age. He still evaluates my progress today and continues to remind me there is light at the end of the dark tunnel I started."

Teeba says writing the book served as a reminder of just how far she's come, but also of the personal and familial bonds that have formed as a result of a terrible accident.

"We had to pick apart the last 17 years of my life," Teeba says. "It was an eye-opening experience, and my two mothers bonded. I learned a lot about myself and both of my families. In my daily life, I don't often think about the tiny village in Iraq I came from and the 19 surgeries I endured."

Barbara and Teeba hope their book inspires readers to look beyond cultural, racial and religious differences to help others face obstacles with courage.

"It doesn't matter what your faith, ethnicity or background is because everybody wants the same thing for their family, their kids and each other," Barbara says. "I love this girl like I birthed her. I can't imagine my life without Teeba, and her mother feels the same way in Iraq."

Teeba says she also wants her story to shed light on the culture of Iraq.

"I hope the reader sees the inside of a culture that is often given a bad rap and are more willing to educate themselves on different cultures and religions prior to having opinions," she says. "Whether they are Muslim, Jewish or Christian, I also hope the reader feels the presence of God and realizes miracles are a real thing. We are all sitting in the palm of God's hand, and sometimes we need a story like mine and my mother's to remind us because it's easy to forget.

"There are going to be hardships, obstacles and hurdles, but it's only going to make us stronger in the end," Teeba adds. "It's important to wake up with gratitude for wherever we are. I'm still learning to be grateful for where I am, where I came from, and where I hope to be someday."